The people of the Southern Kingdom of Judah were afraid. They had seen the Assyrians destroy the Northern Kingdom and now they were not sure if they would be able to survive. God called on Jeremiah to speak to the people.

“I chose you before I formed you in the womb; I set you apart before you were born.” These words from Jeremiah 1:5 reveal a Creator who is sovereign, working out everything in agreement with the decision of His will. (Eph. 1:11)

Jeremiah 1:5 ends with a specific call for a man named Jeremiah: “I appointed you a prophet to the nations.”

Jeremiah was the son of Hilkiah the priest. He lived just north of Jerusalem. Jeremiah’s ministry began when God called him. At that time, Josiah was king of Judah. Whom else did God call in the Old Testament? God called Noah to build an ark (Gen. 6); He called Abram to leave his home (Gen. 12:1-4); He called Moses to lead His people out of Egypt (Ex. 3).

God called Jeremiah to be a prophet to Judah. Judah was deep in idol worship and other sins. God’s judgment was coming. Jeremiah’s job was to warn them. God gave Jeremiah two visions. The first—a branch of an almond tree—was a sign that God would keep His promise to send judgment, and He would do it soon. The second vision—a boiling pot—meant that God’s judgment was coming from the north. God would bring the Babylonians from the north as judgment on His people. Then God sent Jeremiah out to announce God’s declaration.

God had a plan for Jeremiah before Jeremiah was born. God called Jeremiah to share God’s message about sin. In a similar way, God had planned all along to send His Son, Jesus, to show them what God is like and to rescue them from sin.

Help your kids see God’s love even in the midst of His discipline and help them connect Jeremiah’s ministry to the ministry of Jesus. God called Jeremiah to warn the people of the judgment for their sin. Jesus also came to tell people to turn from their sin. He didn’t just tell them about the punishment, He took the punishment on Himself.

Talk to your kids about the true meaning of Easter! Like Christmas, Easter has become commercialized and secular and it’s easy for little ones to get confused and lost in the festivities. Take some time to connect them with the AMAZING and miraculous story of LOVE and VICTORY that was shown to us in the Easter story– of Christ’s death (God didn’t want to punish us, so he took the punishment on himself. God didn’t want to shame us, so he took the shame on himself) and Christ’s resurrection (death was defeated! Sin was defeated! We have freedom in Christ! We are adopted as sons and daughters! Heaven has come to EARTH! Redemption has already begun!) When we truly understand the Father’s immense LOVE shown for us in Christ, our hearts burst with joy and thanksgiving! We are transformed! 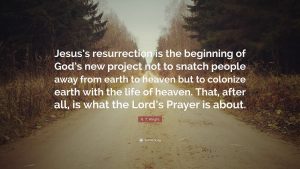