I’ve included some quotes and a short “Why Should You Read This Book”.  Be sure to check these out online, in a bookstore, or in the church library!

•How God Became King: Getting to the heart of the Gospels  by Tom Wright

What it would look like if we really believed that the living God was king on earth as in heaven? That, after all, is the story all four gospels tell.

Matthew, Mark, Luke and John…Paul, Hebrews and Revelation as well…They all think that Jesus is already in charge of the world. (Check out, for instance, 1 Corinthians 15.20– 28; Hebrews 2.5–9; Revelation 5.6– 14.) That was what they understood by ‘God’s kingdom’. But for the four gospels this wasn’t something that simply began at the Ascension. It was true, in a sense, from the moment Jesus began his public career. This was what they were trying to tell us. And most Christians have never even thought about such a thing, let alone begun to work out what it means for us today. 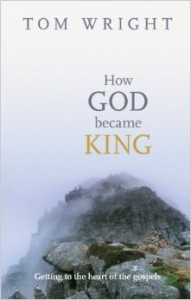 Why should someone read How God Became King?

Now, to put the matter in a popular phrase, it might be true that the sun rises regularly because he never gets tired of rising. His routine might be due, not to a lifelessness, but to a rush of life. The thing I mean can be seen, for instance, in children, when they find some game or joke that they specially enjoy. A child kicks his legs rhythmically through excess, not absence, of life. Because children have abounding vitality, because they are in spirit fierce and free, therefore they want things repeated and unchanged. They always say, “Do it again”; and the grown-up person does it again until he is nearly dead. For grown-up people are not strong enough to exult in monotony. But perhaps God is strong enough to exult in monotony. It is possible that God says every morning , “Do it again” to the sun; and every evening, “Do it again” to the moon. It may not be automatic necessity that makes all daisies alike; it may be that God makes every daisy separately, but has never got tired of making them. It may be that He has the eternal appetite of infancy; for we have sinned and grown old, and our Father is younger than we. 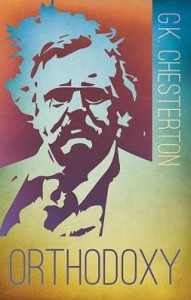 Why should someone read Orthodoxy?

This book is a difficult read, it must be read slowly and pondered greatly. However, EVERYONE should read the chapter “The Ethics of Elfland.” In some ways this chapter has touched me more then anything else I have read about the Bible.  Read it to enter into wonder. Read it to grow child like faith.  Chesterton’s whit is unmatched, and he reminds us that the journey from the reason of earth to the mind of heaven must turn upside down and inside out.  It takes practice!