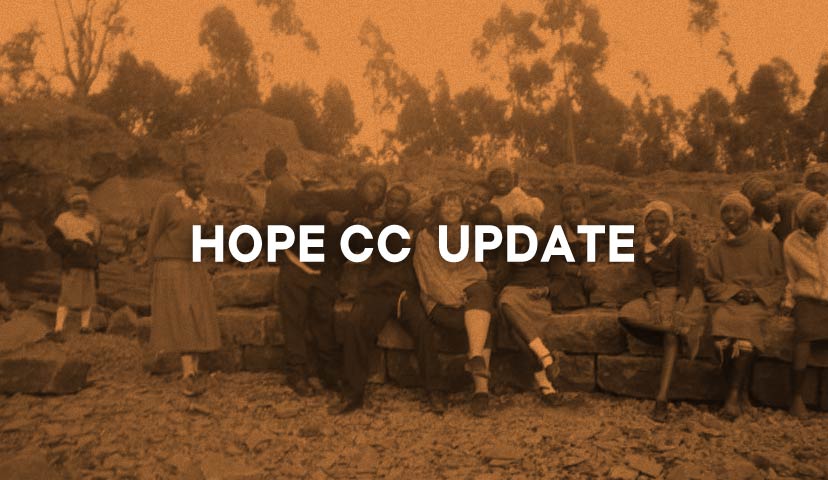 I left for Kenya on March  20th, 2013 for my stay of 11 days.  Since the Kenyan election was held on March 4th and the unpredictability of peace was present, I went by myself instead of taking a group of people with me.  It was very different being by myself at HopeCC but the boys’ talking and laughter on the other side of the wall in the boys’ dorm where I was staying, kept me entertained and put a smile on my face.  It was a busy week for me, teaching and speaking with the students.  It was a great though stretching!

So many changes were evident when I arrived at HopeCC this time.  I had not been there since August last year and so several months had passed.  A new section of fence separated the completed clinic from a parking lot.  The clinic was a great sight with its tiled floor and pictures painted on its walls.  A doctor and nurse come to HopeCC once a week and tend to any medical concerns and also any needed immunizations for the babies.  The dorms had new electricity installed with fluorescent lights and working plug ins.  That was absolutely great!  While there, a trench was dug to bring electricity to the chicken barn where 200 new chicks had just been added to the existing laying hens.   The sea cans in which storage and their vehicles are parked, were moved to behind the clinic since a large area is being prepared to build the new baby dorm/technical school.  Plans have been drawn for a 3 storey building with facilities for the growing babies who need more room.  According to the Kenyan children’s department, the babies cannot join dorm life until they are older since they were received as babies and need to experience ‘family’ life instead of institutional life.  So the new facility will have bedrooms to be occupied by 4 children each, along with their own dining room and kitchen.  The reception area will supervise the goings in and out of the building since there will be 4 large rooms offering technical training for those who will not be going college or university.  There also will be 2 rooms for guests.  Mama Lucy is starting the building in faith, believing that God will provide financially as the building progresses.  It will be a great addition to the compound.  Lucy is not focusing on receiving new babies since space is limited at the present time.  But a hospital had called Mama Lucy, asking her if she could please pick up a 1 month old baby so there she was in the van when Lucy picked me up from the airport.   Little Jane is beautiful and in perfect health.

We had a great day taking the 29 babies aged 1-6 years on a day outing in order to celebrate their birthdays.  They were gathered onto a red bus/van and we all went to a location by Navaisha Lake.  It was quite a sight when they were being outfitted in adult life jackets.  I tried to secure the life jackets tightly to the small bodies and then said a prayer.  Once in the boats, we set out onto the lake.  There were many screams of fear and tears as we proceeded into the water but slowly smiles appeared as we saw hippos playing in the water.  The short boat trip ended on Crescent Island where we let the children lose and they excitedly tried to catch the gazelles!  A ½ ton was summoned and we all were loaded into the back box so we could enjoy the sights of wildebeests, impalas, gazelles, zebras, water buffalo, water bucks, various birds and giraffes.  We had just arrived at the end of our excursion and it started to pour.  Good thing that there was a roof to stand under until the van came to pick us up.  Our celebration ended with an outing in a restaurant.  Now who would dare take 29 small children to eat at a restaurant?  But they were impressively good and waited for their individual plate of chicken and fries.  I was very proud of them!  I have watched them develop from babyhood into little people and they are a delight!

Life is slowly changing at HopeCC.  In addition to the 3 eggs per week, the students also get one fruit per week consisting of a pear, orange, plum or banana.  The garden looks lush and growing well.  Lucy has employed a community woman in dire financial need, to take care of the garden.  It touched me deeply when I went to see her working and she was singing songs of joy!  Some naapier grass was seeded down by the creek in order to be able to better feed their 17 cattle.  The herd will increase by 2 when the calves are born in May.  The previous cook, Paul, has changed his job and organizing HopeCC and doing maintenance.  He, along with other help were increasing the height of the wall since the neighbour is building a dwelling close to the other side of the wall.  Two bee hives are set up at the creek and HopeCC is looking forward to harvesting honey to sell in the near future.

Lucy is anticipating having 30 of her graduated students attending college and university by fall.  A gracious donor has contributed enough finances to support 10 students in furthering their education.  When a student graduates from High School, Lucy finds a job for them or they help at HopeCC for a year before they attend secondary schooling.  It is a good transition to take a year in adapting to live outside the HopeCC ‘bubble’.  This year, HopeCC has been recognized as placing 5th out of 44 high schools in the district for top marks.  In May, Lucy gets an award for being the best facilitator in community development due to her work with the HIV women groups and counselling various individuals and couples in the community.

Since it was the week before Easter, I prepared several devotionals regarding Passover history and why Jesus died exactly then. I also taught 6 sessions on Hearing God which was a total delight for me.  It was heart-warming to see the small groups of students (age 14 and up, about 80 of them) share with each other ways that the Holy Spirit has been speaking to them.  These kids are so keen on developing a more intimate relationship with God and their hungry hearts must have made God smile dearly upon them.  Many comments were made that this teaching was different than they had heard before and they treasured it.  At the end of the last session, time was allotted to hear from God.  I was so encouraged with a picture that God gave me of the many seeds that had been planted and would grow into a great wheat field, providing food for many others.  I learned so much myself as I prepared and presented the information regarding the Holy Spirit wanting to be personal with each of us.  So thrilled that the Holy Spirit is our Helper!

As I reflect on my stay at HopeCC, I have so many treasured memories.  Lucy and I had time to talk and share our hearts with each other.  We are sistas.  She inspires me continuously with her passion to make a difference in these children’s lives and anyone whom she connects with.  Her unwavering faith and trust in God is a great example and demonstration of believing in and serving our God.  Every time I go, I am challenged spiritually and stretched beyond what is ‘normal’.  I am so blessed and privileged to be part of the Hope Community Center family .  They stir my heart to abundant life.