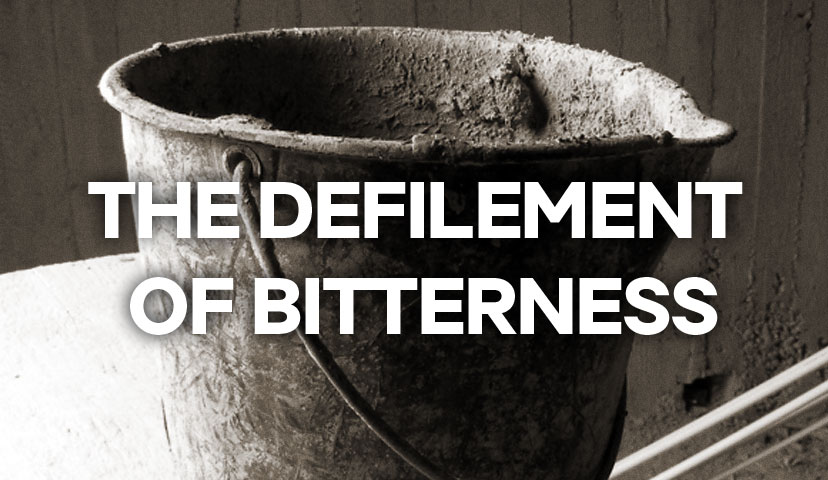 Looking through all of my identity issues, all of my stories, one thing that is very apparent is this:

There’s no way around it.

People can give us labels that affect our identities for years to come: ugly, unloveable, unpopular, etc, etc.

I’m sure if you read these posts, you can relate. Somewhere in the past, someone has hurt you. It’s a natural occurrence in this messed up, fallen world we live in. How we react to the hurt, though—that’s altogether different. We have a choice in every circumstance on how we’re going to react to the wounds of others. We can let go of the wounds. Or we can hold onto the wounds, which most often leads to bitterness and unforgiveness.

In all honesty, I used to be very bitter. I’ve struggled with bitterness a lot. When people wounded me, my first response was to shut down. To build up a wall of bitterness that keeps me captive.

How does this work, you might ask? Someone sins against you, but then you unhealthily cope with the wound and start sinning yourself. It’s a cycle.

For example, because of the girls who excluded me in junior high, I labeled myself unpopular for years afterwards. That was their sin that infected me. However, my sin was this: To protect myself, I turned to bitterness. Not knowingly, but subtly I told myself, You can’t trust people. People will let you down. Don’t ever trust people. Become self-sufficient, act like you don’t care, because you must not care. That’s one of the reasons I hated groups. Yes, I was hurt. But I also was bitter. So the wounds and the unhealthy dealing with wounds both have to be addressed to truly heal. Their sin: exclusion, making fun. My sin: bitterness towards groups and popular people which wasn’t necessarily right in many contexts.

Or, in another example, when I was deeply wounded and had my first heartbreak, I labeled guys a certain way.All guys do is lie. They don’t tell the truth. They’re all hiding horrible things. They don’t know how to love.

See, bitterness labels other people in our minds. It labels our world, our reality. Wounds, and the sinful ways we deal with our wounds, label the world in certain colors that aren’t even necessarily true.

In his book When You’ve Been Wronged: Moving from Bitterness to Forgiveness, Erwin Lutzer writes:

“Whatever you don’t forgive, you pass on.”

This is a scary concept. Whatever wounds we don’t process through, give to God, and truly heal from, we pass on—to ourselves, to people around us, to our children, etc.

When I was a child, a woman I used to know had some serious guy hurt in her life. She’d say things like, “You can’t trust guys,” or, “Guys will always lie. All they want is to sleep with you or use you.” This bitterness tainted her perception of reality. Not all men are horrible. Yes, a lot are—I’m not naïve—but to broadly generalize the world is a dangerous thing.

Her words infected my heart. It was like a disease that passed on to me. Since I saw her often, I internalized these things. I began to truly wonder if guys did all lie, if there really were no good guys out there. Because I was one prone to bitterness, I, too, began to be bitter. Once I was hurt by guys in high school, the bitterness continued. Some of my closest friends in high school were bitter people as well. We might not have realized it at the time, but we were bitter! It was a vicious cycle.

See to it that no one come short of the grace of God; that no root of bitterness springing up causes trouble, and by it many be defiled. [Hebrews 12:15]

It wasn’t until last spring that I began to realize how deeply bitterness had infected my life. I was realizing so many wounds I’ve experienced in the last couple of years; these wounds made me want to shut down and never really love or trust a human again.

But one morning, as I was praying, I got a vivid image stuck in my head. In this image, I saw myself carrying a bucket full of this black, shiny dirt. It was smeared all over me, and the bucket was heavy. But I wouldn’t put it down. People came up to me, trying to talk to me—people totally unrelated to my past hurt. Yet I would take a handful of dirt and throw it in their faces and smear it on their clothes. Soon, everyone around me became tainted.

That morning, I believe God gave me a beautiful picture of what bitterness and unforgiveness does to a person’s life. You carry around the hurts of the past, and it is so heavy. It’s this weight that burdens you in the present life. You see your whole world through that dust, and you are tainted, and you taint others by painting them in that same light.

This, too, is important to realize: I was, in fact, bitter towards God because of the many things that had happened in my life. That was the root of it: I was angry that God had let so many relational wounds into my life: friends, family, relationships, etc.

The root of all my bitterness was the belief that God had not orchestrated my life how He should’ve. The root of my bitterness was in distrusting that God truly had my best interest in mind during everything that happened. I kept telling Him all these things that should’ve been different. “Then I wouldn’t be wounded, or angry, or bitter. Then I wouldn’t be who I am.”

But God, in His graciousness, showed me this: It is not the circumstances that make us who we are. It is our reaction to those circumstances.

We know that God causes all things to work together for good to those who love God, to those who are called according to His purpose.   [Romans 8:28]

I had to give up every face and every memory to God in prayer, asking Him to let me forgive them. To not let my bitterness and unforgiveness hold me any longer. I had to ask Him to teach me to trust Him, to help me to really believe that He works everything out for good to those who love Him.

When I began writing this blog, I had to pray every day that what I wrote would not be bitter, but would be filled with the truth and the love of God. I wanted redemption. Not to call people names and point fingers. I do believe that God has truly helped me process my wounds. I’ve reach a place where I’ve learned to recognize bitterness and confront it when it rears its head in my mind and heart.

Please understand me: it’s hard! Forgiveness is a process. Letting go of bitterness is a process. It takes a constant confessing of the bitter, unforgiving thoughts. It takes a deeper and deeper commitment to letting go of the past. We can’t do it on our own. However, God has not abandoned us. He lives inside us to empower us, and the Spirit can help us in our weaknesses.  Although it has been a painful journey, I can rejoice in the fact that I am free. Free from carrying that heavy bucket around. Free from throwing up the dust of the past and marring the present. Free to trust and love God on deeper levels, finding my identity in Him.

(Note: I am not saying that you mustn’t feel angry or anything for past sins done towards you. Anger is a part of the healing process and is a good thing—as long as it is dealt with properly. So often, anger turns to bitterness—making us victims who won’t heal. That’s when it becomes sin.)

Originally written and posted  by TERYN O’BRIEN  Republished with permission.

Teryn O’Brien is a publishing professional who blogs about Identity in Christ at www.identityrenewed.com.